Automated Calls and Texts: A Consumer’s Rights Guide to Knowing the TCPA.

Have you ever gotten a call like this before:

“Hello, this is Rachel with card services, calling about your credit card account…”

Where you quickly realize:

It is not a real person talking to you…but a pre-recorded message.

This is known as a “robo-call”. And – without your express consent – it is illegal according to the Telephone Consumer Protection Act (TCPA) of 1991.

What is the TCPA?

The Telephone Consumer Protection Act is a way to protect consumers’ privacy at home from unethical telephone marketing activities.

TCPA regulations help prohibit marketers from (unless given your express permission):

The FCC’s website is also an excellent resource for an in-depth legal definition of the TCPA.

As for real-life scenarios…

As TCPA lawyers, specializing in protecting consumer’s rights, the most common TCPA violation penalties we see involve calls and texts made to consumers using an ATDS.

What is an automated Telephone Dialing System (ATDS)?

These are all names for what FCC refers to as an “Automated Telephone Dialing System.” (or ATDS for short)

An ATDS is any system that “can store and contact numbers without human intervention.” 1

This essentially means that it is a system (or software) that allows the user to store a list of phone numbers and then call or text those phone numbers automatically with or without their consent.

Many companies use auto-dialers, but not every-one of them uses robo-callers.

A call from an auto dialer means that the person calling you did not manually type in your number. Instead, a machine calls random numbers from a list until one picks up…

Depending on the company they work for, a bored telemarketer, who has been waiting patiently for someone to take the bait and answer the phone…

…gets your details on their screen while at the same time being patched through to the call – with you. This all happens after you have said hello.

There is usually an unnatural pause between the moment you say “hi, ” and the moment the telemarketer responds.

In this scenario, they are still a real person.

Robocalls… on the other hand

Then, when you answer:

You hear a pre-recorded message OR some form of robot caller software talking to you. There is no actual person on the other end.

Robo-calls can be frustrating. But, they can be (for those with a bit of a playful demeanor). There are anti-telemarketer robots consumers can use to flip the script on pesky telemarketers.

Jolly Roger (no affiliation) provides smart talking robot services to keep telemarketer busy and bewildered. There are even videos on YouTube of telemarketers having complete meltdowns and yelling at these anti-telemarketer bots too.

Something to keep in mind, if you wanted to have a little fun with telemarketers.

A Robo-text is when an automated dialing system sends your phone a message.

Although often sent without a consumer’s consent and an apparent invasion of privacy – they weren’t covered by the original TCPA.

It wasn’t until a full year later on the 3rd of December 1992 that the first text message was sent by Neil Papworth, a 22-year-old UK engineer.

(He texted “Merry Christmas” to Richard Jarvis, an engineer at Vodafone.)

Thankfully, the TCPA has been updated to keep up to date with changing technologies.

The consumer provided express written consent to receive the messages.

Another controversy arose around the TCPA.

Instead of being redirected to voicemail after the consumer didn’t answer, the robocallers were able to go directly to their voicemail to leave an automated message – without making the phone ring.

This meant that they were able to circumvent the TCPA restrictions by:

This new tactic was (of course) not in the public’s best interest.

It was not long until:

The FCC ruled for the TCPA to treat a “call-less voicemail” the same as an unwanted spam text or prerecorded voice call.

How to Stop Unwanted Robo-Calls & Robo-Texts

What can you do when telemarketers use robo-texts or robo-calls to harass you?

Next, if an autodialing telemarketing calls you, tell them not to contact you anymore.

Legally, they must oblige.

But, you and I both know:

That doesn’t always stop marketers, especially when they are using pre-recorded messages or sending robo-texts.

The most effective tactic is to make use of your legal right to fight back. Here’s how:

When being harassed by a telemarketer via phone or text message, keep a record of the contact made. Don’t delete unsolicited text messages. They are your evidence.

Then talk to a lawyer about the precise legal steps you can take in your situation to reclaim your privacy. 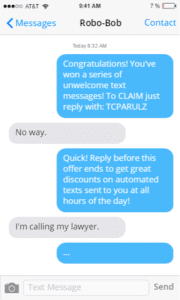 Here’s an example of a typical TCPA case (fictional story, for illustrative purposes only).

Mary receives a spam text message from Big Bank LLC. It says that she has been specially selected to receive a better rate on her life insurance.

Thinking nothing of it, Mary deletes the message and continues her day.

The next day, she receives another message: “Seriously, this great life insurance deal will not last.” This time, Mary is understandably annoyed but decides to ignore it.

Over the next few days, Mary receives another, and yet another, message.

(Being the smart cookie she is) Mary saves the messages and sends the bank an email stating not to contact her anymore. Mary feels happy, knowing the annoyance is behind her.

Now Mary has received almost 20 messages and is sick of it.

She calls her lawyer Jordan, at ZPLLP, about it.

Big Bank LLC. has been sending similar messages to lots of people.

In fact, Jordan has put together a file of over 10,000 automated text messages Big Bank LLC has been sending to people throughout the State!

He explains to Mary that Big Bank LLC is liable for between $500 and $1,500 per unwanted automated text message they sent her.

A quick calculation shows that Mary could receive a decent reimbursement for the disturbance the messages have caused her over the past months.

Feeling fed up with the Bank’s messages and happy at the concept of being reimbursed for the annoyance, Mary goes for it.

Big Bank LLC knows they are about to enter a very lengthy and expensive trial (that will also affect their public image).

So, they quickly agree to pay a TCPA settlement to Mary and the others in Jordan’s class action case.

Jordan has negotiated the terms of the settlement with Big Bank LLC and the courts, and Mary receives a generous check in the mail.

She never received another annoying text message from the bank again.

How much do TCPA cases cost American business? You may be surprised. During 2016: American TCPA cases awarded consumers over a Billion dollars in damages.

Just 10 of the biggest TCPA settlements between September 2016 and October 2017 resulted in over 354 Million dollars in fines.

But, when the discovery was made that the calls were made intentionally to individuals listed on the Do Not Call Registry, that fine was increased to $61 million for willful breach of the TCPA.

According to the judge, this case could have potentially cost the defendants over a billion dollars in fines – if he had punished them to the full extent.

They breached the TCPA millions of times with the use of robocalls and text messages to promote a Christian film to consumers.

ccAdvertising worked in partnership with FreeEat.com and AIC communications to promote the Christian film. This resulted in an equal penalty for the agency.

The ridesharing app was charged with sending unsolicited robo texts to consumers without their consent, even after requests had been made to cease all contact.

Ocwen Financial was accused of violating the TCPA over 100 million times. Most of which were auto-dialed calls made in the pursuit of collecting on debts.

Over the course of 4 years between 2012 and 2016, Cynosure is said to have sent nearly 800,000 unsolicited faxes to businesses for promotional purposes using an automated dialing system. Moreover, the faxes were sent without an option for recipients to opt out.

Accused of using ATDS to send hundreds of thousands of unsolicited marketing text messages, American Eagle was required to pay plaintiffs up to $10,000 each for damages and loss of privacy they caused victims.

US Coach was found guilty of sending roughly 391,459 automated text messages to individuals, marketing their services, without express prior consent from the consumers.

Recipients had provided their phone number to the company but for other reasons. US Coachways had not informed customers that their contact details would be used for sending promotional materials.

Class action members received up to $900 each.

Even though Sirius denied the allegations, as many companies do, they still agreed to a settlement.

Victims claimed that Sirius used predictive dialing systems to contact them without their express consent.

The Growth of TCPA Cases

Your privacy rights are better protected today than ever before. It is easier than ever for a victim of unethical telephone marketing activities (like Mary) to get justice.

Until recently, this was not the case. Consider this:

The TCPA was enacted in 1991 by George Bush Senior. But, by 2008, still less than 20 reported cases involving the TCPA were brought to court each year. That’s 17 years later!

Before 2008, telemarketers were still able to use automated telephone dialing systems to call just about anyone.

Katy Perry kissed a girl and apparently enjoyed it…

…and Twilight came out as a movie in the Horror genre??

2008 was the year that the FTC and FCC ruled that telemarketers must receive express prior consent from consumers before contacting them with autodialers.

(If you are being harassed by autodialing telemarketers, let us know.)

…It led to the sizable uptick in cases you can see after 2009 (some cases take up to a few years to come to a resolution).

Put it in writing…

The second boost to TCPA lawsuits happened in 2012.

This is when the FCC ruled that:

Not only would you need express prior consent to contact consumers using robocalls, but it had to be express written consent.

This small change put consumers in an even stronger position against unethical marketing companies.

Because, if the marketing company couldn’t prove that the consumer provided explicit written consent to their robocalls…

They would immediately be in direct breach of the TCPA and liable for damages.

The most recent truly game-changing win for consumers came back in 2015.

(When you know legal history, the graph makes sense, doesn’t it?)

(By the way – This is also when the Twilight-inspired fan-fiction, 50 Shades of Grey [which sold over 125 million books], hit the big screen.)

The TCPA stands as steady as ever. Consumers’ rights are protected fiercely, and those who violate the law pay the price.

The number of TCPA cases is increasing and yet organizations are still violating the law. The good news is:

As a lawful consumer, you have the right and the opportunity to pursue legal justice against unethical behavior from marketing companies.

So, if telemarketers are harassing you with autodialers or robo texts, contact your consumer protection lawyer to discuss filing a legal complaint.