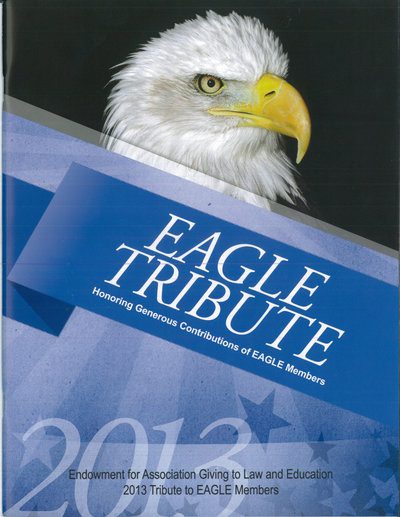 Zebersky Payne Shaw Lewenz, LLP partner, Edward H. Zebersky, was a recipient of the Lawyer to Legacy 2013 EAGLE Legend Award this year by the FJA. Congratulations to Ed for this wonderful acknowledgement. The Florida Justice Association each year honors prominent attorneys in the state of Florida who distinguished themselves in service and generosity to EAGLE. These leaders help the FJA maintain the fight in Tallahassee and fund the world-class staff, lobbyists and educational programs.

The FJA EAGLE program funds and fuels its legislative efforts. EAGLE is also the fundraising arm of the FJA and its political action committee, The Florida Justice PAC (FJPAC). The EAGLE program is comprised of more than 800 attorneys. Ed has made a lifetime achievement of $100,000 or more to the FJA EAGLE program.

Ed has had a love affair with his other wife, the Florida Justice Association since his membership in the early 90’s. Since that time, Ed has been the Chairperson of the Insurance Committee from 1999-2005 and 2011-2013. Ed has served on the Board of Directors, the Executive Committee and has served as the Secretary, Treasurer, President-Elect, President and Immediate Past President for the Florida Justice Association. He also served on the Executive Committee again in 2012 0 2103 at the request of his good friend Gary Farmer. During that time, Ed has been a frequent visitor to Tallahassee where he has been instrumental in ensuring that the insurance laws in the state stay consumer friendly.

But in the end, Ed’s greatest legacy is his boys (David, Myles and Micah) who are learning by example to endeavor, each day, to make the world a better place than the day before.